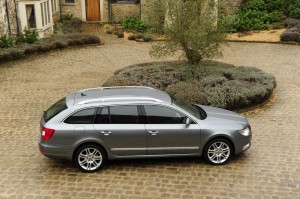 The Superb outshone the competition for the second year running in the Best Large Car category, whilst the new Superb Estate was named Best Estate Car winning over stiff competition from a number of other brands.

The Yeti was also recognised in the awards, earning the runners up spot in one of the new categories; best Crossover Car. Since its launch in September 2009 the Yeti has proved to be a runaway success, winning the Top Gear magazine ‘Family Car of the Year’ award and being shortlisted for European Car of the Year in 2010.

In recognition of the Superb’s impressive design and value for money, the Diesel Car awards will join the array of other accolades that the Superb has picked up to date including the Top Gear Luxury Car of the Year Award in 2010.

Well deserving of the top spot in the Best Estate Car, the new Superb Estate was launched at the start of the year and is the largest and most luxurious car to ever wear the Škoda badge. Originally designed in the 1930s with luxury and elegance in mind, today’s Superb range builds on these strengths, with more rear legroom than many prestige cars on the market and some ingenious technological advances such as AFS (adaptive front light system), touch screen technology and park assist.

An acknowledgment of the high standard and quality of the Škoda Superb, the Diesel Car Awards demonstrate that the luxury, striking design and value for money that the Superb offers is certainly a winning combination.